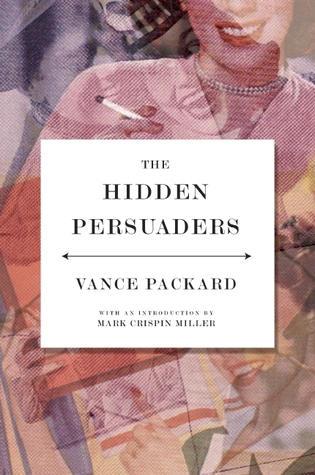 "One of the best books around for demystifying the deliberately mysterious arts of advertising."--Salon

"A brisk, authoritative and frightening report on how manufacturers, fundraisers and politicians are attempting to turn the American mind into a kind of catatonic dough that will buy, give or vote at their command--The New Yorker

Originally published in 1957 and now back in print to celebrate its fiftieth anniversary, The Hidden Persuaders is Vance Packard’s pioneering and prescient work revealing how advertisers use psychological methods to tap into our unconscious desires in order to "persuade" us to buy the products they are selling.

A classic examination of how our thoughts and feelings are manipulated by business, media and politicians, The Hidden Persuaders was the first book to expose the hidden world of “motivation research,” the psychological technique that advertisers use to probe our minds in order to control our actions as consumers. Through analysis of products, political campaigns and television programs of the 1950s, Packard shows how the insidious manipulation practices that have come to dominate today’s corporate-driven world began. Featuring an introduction by Mark Crispin Miller, The Hidden Persuaders has sold over one million copies, and forever changed the way we look at the world of advertising.

Vance Packard (1914-1996) was an American journalist, social critic, and best-selling author. Among his other books were The Status Seekers, which described American social stratification and behavior, The Waste Makers, which criticizes planned obsolescence, and The Naked Society, about the threats to privacy posed by new technologies.

★ ★ ★ ★ ☆
Lyndon Bailey
Some of it is overblown and sounds like 'The Firm'..pinch of salt required since many of the testomonies are from industry talking heads.Nonetheless and good window into cultural trends and advertising in the 1950s of the U.S. and prescient for other cultures who are being exposed to American values only in more recent decades. The citations from Riesman's observations about molding the people to fit into industrial culture and the cultivation of the 'other-directed' man is pretty chilling.
★ ★ ★ ★ ☆
Amber Berry
I've been thinking about this book over the last year or so as I've been trying to downsize and refrain from buying new possessions. I read this when I was in high school in the 1960s and it must have left an impression. I don't remember it as being well written, but it had relevant ideas.

I could not remember the author nor the title until a few weeks ago. Since it's been reprinted, I may read it again.
★ ★ ★ ☆ ☆
Kelly
This book is quick and anecdotal and in many ways not nearly as controversial as Mark Crispin Miller purports it to be. And then you are reminded it was written in '57 and we have gone way past the point of no return. At the time it was written the average American was being conditioned to be less inward-directed and become more outward-directed. Now one wonders if the depth psychologists and motivational researchers are now turning consumers into the product.
Five Little Peppers Abroad :: Bergdorf Blondes :: The Far Pavilions :: Where the Red Fern Grows :: Baby Island
★ ★ ★ ☆ ☆
Dan
Years before Naomi Klein wrote her No Logo, Vance Packard wrote of the way in which marketers were employing the findings of psychology in order to market more aggressively to consumers. For most contemporary readers, this is probably an instance of a conspiracy theory that is no longer a theory nor a secret.
★ ★ ★ ★ ☆
Karie
This book was written 50 years ago and reads like a textbook, but it raises some interesting points about market research and the use of psychology to manipulate the buyer. 7/8ths of the book is how buyers are manipulated, and 1/8th is the validity of the research and the morality of its use, which was the more interesting question. It'll make you question why you buy the things you do, and offers the antidote to advertising manipulation: education.
★ ★ ★ ★ ☆
Jim Sturm
Read it in when I was in high school about 1965. One of the most influential books of my life. Why? Timing, I guess. The naive teenager takes a peek behind the curtain. A revelation that fundamentally changed my view of advertising and the world. Made me a skeptic, of course, but also enhanced the cynic in me.
★ ★ ★ ★ ☆
Serenity
A bit of a slow start. First 50 pages I wondered if I was going to enjoy it. One off the David Bowie 100 fave books list. Once I got into it, I enjoyed it. If Packard was worried about how advertisers and psychologists were influencing people back in the 1950s, he would kittens about it now! The death of the individual is in full swing as predicted in this book.
★ ★ ★ ★ ★
Jason Antoniewicz
Important and influential text about the methods used by advertisers on a largely unsuspecting public. Some say it's dated, now, but for me it still remains an essential text in how it presented its message in an important and accessible way.
★ ★ ★ ☆ ☆
Ann
The book is important mostly for historical purposes, and much of it is now common folklore, but still a really interesting look at the state of advertising in the late 50s in the US.
★ ★ ★ ★ ☆
Niloy Mitra
Surprisingly good book. Well ahead of its times. Shocking good and insightful, though lacking any rigor.

'At times it is pleasanter or easier to be nonlogical.'
★ ★ ★ ★ ☆
Chirag
More than half a century old, but still relevant. Makes you think, where are we going to stop (consuming )?
★ ★ ★ ☆ ☆
Rune Pedersen
A classic when it comes to motivational research and manipulation. A must-read for all who's interested in the history of advertising.
★ ★ ★ ★ ★
Linda
Of course outdated in many ways, yet still a good insight into how minds tick.
★ ★ ★ ★ ☆
Santo
Nel libro, interessante e scritto bene! Consigliato
★ ★ ★ ☆ ☆
Gary Norris
used this with Thomas Frank's The Conquest of Cool when I was teaching composition in 2005.