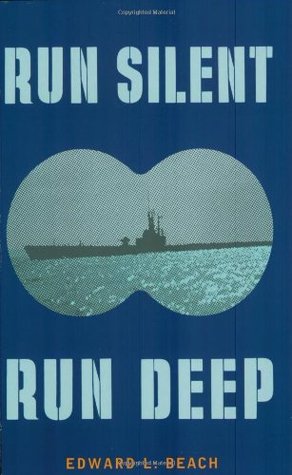 An American equivalent of Das Boot, this gripping, bestselling novel of submarine warfare inspired a well-known Hollywood film starring Burt Lancaster and Clark Gable. Set in the aftermath of the attack on Pearl Harbor, the tension-filled story focuses on an American submarine captain given orders to destroy Japanese shipping in the Pacific. At first his missions go well, but when he takes on an infamous Japanese destroyer, nicknamed Bungo Pete, a terrifying game of cat and mouse begins. From the training of the crew right through to the breathtaking climax, this tale is absolutely riveting, and will have fans of military writers such as Tom Clancy cheering.

Edward L. Beach graduated from the U.S. Navy's submarine school just two weeks after Pearl Harbor, and fought in the Pacific for the rest of the war. Run Silent, Run Deep was his first novel and became an immediate bestseller.

★ ★ ★ ☆ ☆
Hugo
a gripping tale of submarine warfare in the pacific theater of WW2, the book seems to very accurate in technical terms, but suffers when it comes to dialogue and character description.

Having read this after watching the movie adaptation, I must say that the ending was much improved for the movie version.
★ ★ ★ ★ ☆
Pamela
There was a lot of information about submarines and the real action didn't start until about half way through the book, but it kept me reading in the first part of the book and then I couldn't put it down the last half.
It was a huge difference fighting in World War II with submarines, than it became with the advent of nuclear powered subs, that truly can "run silent, run deep."
★ ★ ★ ★ ☆
Aaron Meyer
Not a bad book for those people who are into the history and / or stories about submarines in combat. The beginning of the book is slow in my opinion but once they get into the Pacific it is on! I must admit that 2/3 of the way through the book I guessed exactly how it would end but never guessed how dramatic it would be. Well worth the time to read it.
The Wildest Brother :: The Best of McSweeney's, Vol. 2 :: The Monk Downstairs :: Curtain :: Leave Me Alone, I'm Reading: Finding and Losing Myself in Books
★ ★ ★ ★ ☆
Brian
A fun read. Really shows what it was like for a submariner in World War II. The cat and mouse game between the submarine and the ships it must either destroy or evade. I thought the love story sub-plot was a little heavy handed and probably unnecessary. Now I am going to rent the movie. The cast of the movie is amazing, with Clark Gable playing the lead. Wow.
★ ☆ ☆ ☆ ☆
Robert Studivan
I thought I would be a lot more satisfies by this book and I am highly disappointed. the action is rather poorly drawn, the side parts to the stories are weak and the dialogue is that of an actor reading a script. poor suggestion goodreads.
★ ★ ★ ☆ ☆
Ron
This is one of the great classics of naval warfare written by a man who had 'been there, done that.' While the authenticity of the account is beyond question, the writing and story line are a bit clumsy at times (thus the three stars.) Very good read though.
★ ★ ★ ★ ☆
Kevin
really good book, loved the battle scenes, the in depth view of how a submarine is run how a crew is trained, the romance was a bit sappy and could have done without the racial overtones but otherwise a real page turner
★ ★ ★ ☆ ☆
T.J.
Very authentic with regard to the U.S. Navy and to its submarines in WWII. The battle scenes were exciting and suspenseful. Character development and the rest of the plot were a bit simplified but not inept.
★ ★ ★ ☆ ☆
Dan Yingst
The battle scenes were appropriately heart-pounding and carried a real sense of realism, but the book overall struck me as somewhat tin-eared. Very obvious the author knew what he was talking about, but that doesn't necessarily make for good reading.
★ ★ ★ ★ ☆
David
Better than the movie, which is good too.
★ ★ ★ ☆ ☆
Jean-Vincent
Fictionnal work by a veteran WWII US submarine skipper.
★ ★ ★ ☆ ☆
Brandon Dean
Read this as a kid. Fond memories, if you like WWII stories, I'd recommend it.
★ ★ ★ ★ ☆
Brian Rueger
Probably one of the first war novels I read.
★ ★ ★ ★ ★
Robert Kaufman
Great book! Hunt for Red October before Tom Clancy (who has no peers in the genre)
★ ★ ★ ★ ☆
Denise Foster
I found it suspenseful and it held my interest but I am not a fan of war novels unless they relate to women or children.
★ ★ ★ ★ ★
Charles
Excellent read. Exactly what I expected from a classic
★ ★ ★ ☆ ☆
Jack
bogs down a little in the middle but otherwise very good.
★ ★ ★ ☆ ☆
Catherine
One of the first books I read. Cemented my love of historic fiction.

This plot has been borrowed numerous times since.
★ ★ ★ ★ ☆
Rob
Good submarine drama by someone who was in the service. Strong story that doesn't pull many punches.
★ ★ ★ ☆ ☆
Tom
Entertaining WW2 submarine fiction. Loosely based on the writer's experiences, but not based on actual events. Does a good job of putting you in the sub & feeling the tension.
★ ★ ★ ★ ☆
Jim Bailey
A real man's book for a change. Definitely not chick lit.
★ ★ ★ ☆ ☆
Eric
Interesting story centering on WWII sub warfare. Abrupt ending. Overall lacking some story development.
★ ★ ★ ★ ★
Craig
Excellent novel about US submarine warfare in the Pacific during WWII. A lot of technical language.
★ ★ ★ ★ ★
Yonnibardavi
One of the best books on the American submarine force during WW2.
★ ★ ★ ★ ★
Michael Niccum
This novel is a masterful warship thriller.
Leave Feeback for Run Silent Run Deep
Useful Links