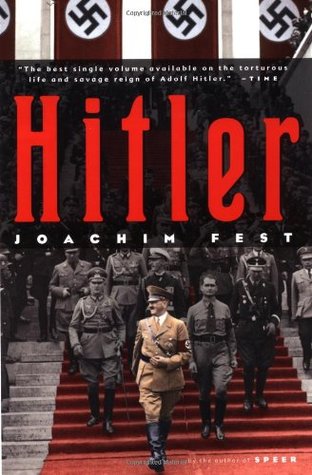 A bestseller in its original German edition and subsequently translated into more than a dozen languages, Joachim Fest's Hitler as become a classic portrait of a man, a nation, and an era. Fest tells and interprets the extraordinary story of a man's and a nation's rise from impotence to absolute power, as Germany and Hitler, from shared premises, entered into their covenant. He shows Hitler exploiting the resentments of the shaken, post-World War I social order and seeing through all that was hollow behind the appearance of power, at home and abroad. Fest reveals the singularly penetrating politician, hypnotizing Germans and outsiders alike with the scope of his projects and the theatricality of their presentation. Fest also, perhaps most importantly, brilliantly uncovers the destructive personality who aimed at and achieved devastation on an unprecedented scale.

As history and as biography, this is a towering achievement, a compelling story told in a way only a German could tell it, "dispassionately, but from the inside." (Time)